‘The last of my péchés de vieillesse’ (sins of old age) is how Rossini described the Petite Messe Solennelle, which the Sydney University Graduate Chamber Choir is delighted to present as the Graduate Choir’s last concert of 2018. The performance coincides with the 150th anniversary of Rossini’s death (on 13 November 1868). 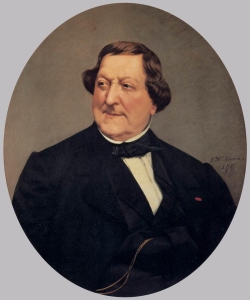 The ‘Little Solemn Mass’ is one of the greatest works of this genius Italian composer. It was written in 1863, towards the end of his extraordinary life. Despite its title, it is a large opus, full of passion, drama and poignancy, as may be expected from a composer of 39 operas, as well as sacred music, chamber and piano music. Rossini was much influenced by Haydn and Mozart, and the considerable technical skill in this work reflects in part his study and love of Bach.

Dedicated to Louise, wife of Count Alexis Pillet-Will, at whose salon the work was first performed in 1864, the Petite Messe Solennelle was unusually scored for voices (’12 singers of three sexes: men, women and castrati’), two pianos and harmonium. It was later rescored for choir and orchestra, however Rossini himself apparently expressed a preference for the smaller, more intimate chamber scoring.

On this occasion it will be performed in its original form by the Sydney University Graduate Chamber Choir accompanied by two pianos and reed organ. The performance will be conducted by the music director, Christopher Bowen OAM. The choir will be joined by an outstanding line-up of soloists: Elke Hook (Soprano), Ashlyn Tymms (Mezzo-soprano), Ben Oxley (Tenor) and David Hidden (Bass).

Please join us at 5pm on Sunday 9 December, at the University of Sydney Great Hall for a wonderful afternoon of music.

Tickets are available from www.sydunigradchoir.eventbrite.com or at the door.

This entry was posted in Uncategorized. Bookmark the permalink.