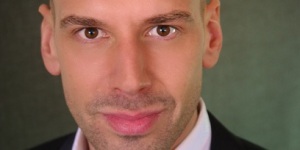 In recent years, Adrian Tamburini has become one of the Choir’s favourite soloists. Adrian first sang with us as bass soloist in the premiere of Christopher Bowen’s An Australian War Requiem in August 2014, and returned for Dvořak’s Stabat Mater, von Suppé’s Requiem and, most recently, Haydn’s Die Schöpfung, the brilliant recording of which I am listening to, as I write. Those performances were all outstanding and Adrian contributed significantly to their success. We look forward to future engagements for him with the Choir.

As a Principal with Opera Australia, Adrian is a splendid asset. He plays Zuniga in the current production of Carmen on Sydney Harbour.  His performance in this small role drew the following striking comment from the SMH’s music critic, Peter McCallum who stated “As the officer, Zuniga, Adrian Tamburini creates a persona of imperious entitlement.”

His talent is further evidenced as the recipient of the 2017 Opera Award, a prestigious prize which will allow him to continue his studies in Europe.

We congratulate Adrian on his successes and look forward to the time when we have the chance to see Adrian in a robust role, such as King Philip in Don Carlos or Germont père in La Traviata. That too would surely be a brilliant performance!