Changing of the guard in the leadership of the orchestra

One of the important factors, which makes attending concerts by the Sydney University Graduate Choir a rewarding experience is the consistently outstanding contribution made by our excellent orchestral musicians. Christopher Bowen has established such a good rapport with them that many of the musicians perform so regularly at our concerts and perform at such a high standard of professionalism, that one might take them for a permanent orchestra. 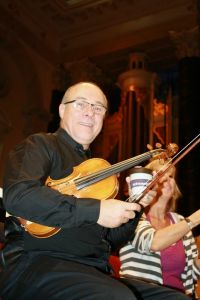 For the past few years, we have had the good fortune to have had Stan W. Kornel as Concertmaster. Stan has been a member of the Sydney Symphony Orchestra (SSO) since 1988. He is an early music specialist, and the Sydney Consort, the early music ensemble which he founded in 1996, is a valuable contributor to the musical life of New South Wales. (A number of choir members have become regulars at the Consort’s concerts and we can recommend them to anybody interested in scholarly informed and beautifully performed early music).

Stan’s musicianship, enthusiasm and experience have been important assets to the orchestra and of great assistance to Christopher Bowen. Stan has been centrally involved in the important milestones of the Choir’s concert-giving in recent years: our Verdi Requiem of April 2013; the premiere of Christopher’s An Australian War Requiem in August 2014, and the Joan Carden Award Finals concert, for the first time  with orchestra and before an audience in August 2015.

Unfortunately, Stan has come to the regretful but unavoidable conclusion that the pressures on his time associated with performances of the SSO and the Sydney Consort will no longer permit him to lead the orchestra in our concerts. He says that he has derived great pleasure from the association and sends his best wishes to the Choir. We would like to place on record our thanks for Stan’s splendid contribution and to wish him all the best for the future.

It is good to be able to report that the connection between the first desk of our orchestra and the SSO’s violins is set to continue. .Pamela Traynor (soprano), the Choir’s Orchestra Manager informs us that, beginning with our next concert, a performance of the Requiem of Franz von Suppé on Sunday, 8 May, the orchestra will be led by Kirsten Williams. Kirsten has been Associate Concertmaster of the SSO since 2000. She has also been a member of the orchestra of the Royal Opera House , Covent Garden, and spent two years as a member of the Academy of St. Martin in the Fields. Kirsten has also been a member of the Australian Chamber Orchestra as Associate Leader, and Guest Concertmaster of the Australian Opera and Ballet and the Queensland Symphony Orchestra.

We would like to welcome Kirsten to our choral world. We trust that she will enjoy making music in the Great Hall with a distinguished group of instrumentalist colleagues – and us.