A number of the soloists who have given great pleasure in their performances with the Choir are currently doing very well with Opera Australia (OA).

In particular, Anna Dowsley, the young mezzo-soprano who starred in our memorable Verdi Requiem in April 2013, after being highly commended by the judges in the 2012 Joan Carden Award), and who also was a soloist in our December 2013 concert of baroque music by Zelenka and Vivaldi, has begun to sing important principal roles. She has received favourable reviews for her performance as ‘Cherubino’ in the current production of Mozart’s The Marriage of Figaro; in the words of Limelight magazine, Anna is ‘a singer very much on the rise’, and is proving ‘a firm audience favourite’. In the Sydney Morning Herald, Peter McCallum wrote that she sang ‘the character’s two magical arias with fresh bright-eyed colour’ and ‘brought credibility to the chemistry that must be ignited between her and the Countess.’ Having attended a performance of this production, your correspondent can attest to the fact that Anna belongs on the stage of the Opera House. She received a particularly warm curtain call and was an obvious hit with the audience.

Opera Australia clearly has great expectations of her. Writing in OA’s prospectus for 2016, Lyndon Terracini, the company’s Artistic Director, singles Anna out for special mention: ‘In 2016, we see Australian singers take on new roles, such as Nicole Car in Luisa Miller and Anna Dowsley in The Barber of Seville.’ Anna, in fact, is scheduled to sing the role of Rosina, the female lead in Rossini’s masterpiece, and will also be singing Dorabella, one of the two female leads in Mozart’s Cosi Fan Tutte. A singer very much on the rise, indeed.

In the light of this career momentum, it is great to be able to say that Anna will be singing in the Choir’s next concert, our performance of Handel’s Israel in Egypt on 6 December in the Great Hall. We can feel very gratified that, through the Joan Carden Award, we have established a strong relationship with this outstanding singer. 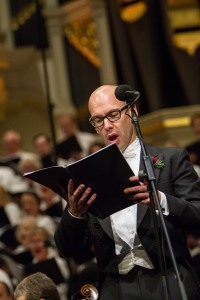 The career of bass Adrian Tamburini is further developed than Anna’s. His excellent singing was very significant in our performances of Christopher Bowen’s An Australian War Requiem in August 2014 and Dvořák’s Stabat Mater in May this year. Adrian sings roles in a number of OA productions next year, including the important one of the Speaker in The Magic Flute. He sang the role of the Gardener in the production of Figaro mentioned above and made it into a memorable and central one.

Tenor Stuart Haycock sang in our performance of The Creation of Haydn in August 2009 and our Australian premiere of Beethoven’s Cantata on the Death of Emperor Joseph the Second in May 2006. He sings a couple of roles in OA productions in 2016, in Verdi’s Luisa Miller and Simon Boccanegra. Baritone David Greco, who sang with us in the December concert of music by Finzi and Vaughan Williams, has a small role in Prokoviev’s The Love for Three Oranges.

Former winners of the Joan Carden Award (JCA) are also represented in next year’s OA program. Eva Kong, who, as Jinhee Uhm won the JCA in 2008, also has a role in Verdi’s Luisa Miller, and sings the important role of ‘Liu’ in Turandot, OA’s Handa Opera on Sydney Harbour for 2015. Eva sang the role of ‘Barbarina’ in the recent production of Figaro, and brought out all the charm and loveable nature of this character. (Eva won your correspondent over by referring specifically to her performances with Grads, in our performances of the Saint-Saëns Requiem (2009) and Mozarts ‘Great’ C Minor Mass (2010) in her biographical note in the program.) Finally, Agnes Sarkis, JCA winner in 2012, sings Cherubino in the 2016 touring production of The Marriage of Figaro.

Beyond Opera Australia, it is a pleasure to record major success for another young singer, who has been a soloist with the Choir. Baritone Alexander Knight has sung with us on a few occasions, notably in the title role in Mendelssohn’s Paulus in May 2012. On 1 August in Melbourne, Alexander won the German-Australian Award for 2015, which carries with it a Principal position at the Wiesbaden Opera. It is very good to see this accomplished young artist recognized in this way.