In one of the letters Christopher and I read at the Australian War Memorial, written by Asdruebal James Keast to his mother during the War, there is a reference to a poem from ‘Jim’, his friend. Keast wrote that the poem was written after a burial at sea on the way to Heliopolis. I very much wanted to include the poem On a Dying Soldier in the libretto, but I needed to obtain permission to do so.

Hence the search for Reginald James Godfrey’s descendants to ask for permission. Christopher and I were on the job…

We looked at Keast’s embarkation records in the search for ‘Jim’ and these records revealed a Reginald James Godfrey had embarked at the same time (on the HMAT Geelong A2, on 31 May 1915). This name was listed immediately before Keast’s name. So we suspected that the James could be ‘Jim’! On the Embarkation Rolls Godfrey’s Service Number was 3985 and Keast’s 3986. I was later to discover that both men were pacifists, and—as with so many others —had joined the Field Ambulance Brigades to help with the war effort without compromising their principles.  With this, the connection between them was established. 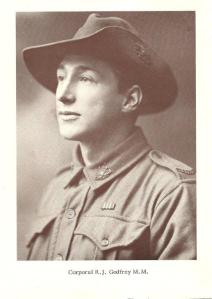 Godfrey, I learned, lived in Murray Bridge, South Australia. Further research through the Murray Bridge Historical Society revealed that Reginald James Godfrey was a poet, and some of his poetry had been published. Armed with this information, I then discovered Adelaide historian Glenys Edwards who had published a small volume of Godfrey’s poetry.

I corresponded for a couple of months with Glenys—we were both determined to find Godfrey’s descendants. When Glenys had published his poems, she only had the first names of his children—no surnames— and didn’t ultimately find them before the book of poetry was completed. Even finding someone with the knowledge of just a first name was challenge!

Godfrey’s children’s names were Dolores, Violet May, Paula and son John Dan. The girls had very likely married so no surnames there. But I pursued John Dan Godfrey. Having established that the family had moved to Murray Bridge in South Australia in the 1940s,I wrote a letter to the last known address there, but my letter was soon ‘Returned to Sender’.

Glenys also wrote to the address, to no avail. I then wrote to the Murray Bridge RSL Branch but they also had no knowledge nor records.

Along the way I’d contacted Val and John Stafford,  Asdruebal Keast’s family. Val remembered Godfrey very well , told me that he often came to their home and that Asdruebal and Jim became very close friends from the time they met—a friendship that was to last all their lives. She remembered the wonderful times they spend together, laughing, reminiscing. But, ultimately Val couldn’t help me in locating Godfrey’s descendants.

My next strategy was to write to the Editor of the ‘Murray Valley Standard’ in Murray Bridge and they published my letter. But no response.

By that time I’d discovered the first names (again no surnames) of Godfrey’s grandchildren and wrote again to the Murray Bridge newspaper and they published my second letter which read:

SEARCHING FOR A FAMILY

We need to contact descendants of Reginald James Godfrey who was a resident of Murray Bridge and who died on June 5 1979.

His grandchildren’s names are Lesley, David, Jamie, Alison, Meredith, Roger and Felicity. This inquiry is in connection with the poetry of Reginald James Godfrey. If his grandchildren, named above, or anyone knowing Godfrey’s descendants would get in touch we would be most grateful for any information…

Then came my first small nugget of gold. I was contacted by ‘Helen’, who wrote ‘I saw your letter in our local paper. My late cousin was married to Dolores Godfrey. Their three children all live in the south east of South Australia. Most importantly, Helen provided contact details.

So, there the story ended. I phoned Jamie, Godfrey’s grandson, and he gave permission to use the poem On a dying soldier. And I was pleased to be able to put Jamie in touch with Glenys Edwards so that he could read much more of his grandfather’s poetry.

Reginald James Godfrey and his dear friend Asdruebal James Keast died within a year of one another.

Jamie and family and Val and John Stafford will be travelling from South Australia for the premier of An Australian War Requiem.

This entry was posted in Uncategorized. Bookmark the permalink.