An Australian War Requiem—beginning our journey

There is something very special about picking up the score of a newly composed work at the start of a rehearsal period; of leafing through the pages and ever-so-slightly stumbling over unfamiliar words, fumbling through initially alien harmonies. The contents between the clean black covers is a mystery. For this work we have nothing to fall back on—no prior knowledge, no overarching ‘genre’ or ‘era’ to provide clues about harmonic progression and musical structure, as we do when we sing the works of Bach, Mozart and Haydn. We are in uncharted territory. 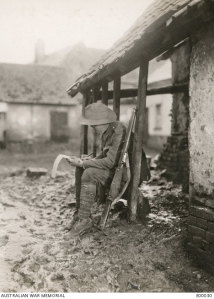 And yet, as our musicianship has expanded with each year’s series of concerts, it takes only one (or perhaps two) rehearsals before the lilt of the melodic lines begins to fall into place and the cascade of chords and implicit percussion compellingly tell their own story of cold winter’s nights, of gunfire, fear and lament.

This is an emotional work to sing. The story that unfolds within the score is universal, and calls to everyone: a man’s expression of the horror he’s surrounded by, a mother’s heartache for her young son so far away in a foreign land, her grief at his loss. His letters written home to his mother—missing her, confiding, frightened, angry. Its premiere (at the Sydney Town Hall on 10 August) is promising to be a most memorable occasion, a fitting commemoration of those who went off to ‘do their bit’ in the Great War, and of those who waited behind praying for their boy’s safe return.

We hope to share this experience with you, through our blog as well as a soon to be unveiled dedicated website We invite those who might be interested in singing with us to join our Guest Choir. (You can find more information about guest registration here). And not least, we hope you can join us as the Sydney Town Hall at 3pm on 10 August 2014, for the premiere of An Australian War Requiem.