The Kornels and the Sydney Consort: Stabat Mater

In a blog item posted on 28 February, we reported on the first concert of 2014 by early music group, the Sydney Consort, which is led by the concert master of the Choir’s orchestra, violinist Stan Kornel, and has as an important member, keyboard player Monica Kornel, Stan’s wife. We also foreshadowed the group’s second concert for the year, a blend of sacred vocal and instrumental works to be  performed at St Augustine’s Catholic Church on Good Friday, 19 April. A number of us attended this second concert and it is a pleasure to be able to report that it at least equalled in quality the February event. 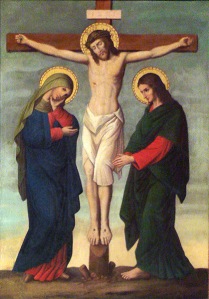 The biggest work performed by the group was the Stabat Mater of Antonio Caldara (1670-1736). The four solo singers in this work included two, who have sung with us: Belinda Montgomery (soprano) who sang in our performance of Zelenka’s Missa Dei Patris last December; and Alexander Knight (baritone), who has performed with us on several occasions, most notably in the name role of Mendelssohn’s Paulus in May 2012. The other members of the vocal quartet were Anna Fraser (mezzo) and Richard Black (tenor), both from the Song Company. The vocal program also included three short but lovely works by Marc-Antoine Charpentier (1643-1704), whose Te Deum and Messe de Minuit sur des Airs de Noel the Choir performed in December 2009 and December 2010 respectively.

The singers combined beautifully in all the works they performed. In particular Alexander Knight once again impressed with his elegant tone and cultivated singing.  The Caldara work employed two sackbuts, played by Nick Byrne and Jonathon Ramsay. These ancient instruments made a very distinctive sound and gave us a foretaste of what to expect, when they are added to the orchestra for our Salzburg Connection concert next month.

The program also included two exclusively instrumental works. The first of these was one of Heinrich Biber’s so-called Rosary sonatas, a collection of 15 sonatas for violin and basso continuo composed in the mid 1670s, ‘to the honour of the 15 holy mysteries of the Rosary,’ (in effect an early attempt at program music), and dedicated to Biber’s employer, the then Archbishop of Salzburg, Max Gandolph Graf von Kuenburg.  The soloist in this performance of the Sonata depicting the Crucifixion was Stan Kornel, who was supported by Fiona Ziegler on tenor viol (a sort of small viola da gamba, without frets) and Monika Kornel on chamber organ.  Stan was well up to the technical demands made by Biber, who was a virtuoso of the violin and one of the most interesting and original Baroque composers.

The other instrumental work was one of Arcangelo Corelli’s Church Sonatas, performed by Stan Kornel and Fiona Ziegler (baroque violins) and Monika Ziegler (chamber organ). The ensemble gave a fine performance of Corelli’s characteristically attractive work. This served as a prelude to Caldara’s Stabat Mater, which followed seamlessly without a break, even for applause.

This concert confirmed the impression created by that in February, that the Sydney Consort is a high quality ensemble, well worth the support of members and followers of the Choir. The next opportunity for this will be their next concert, which will take place at 8.00 pm on 23 May in the same venue. The concert, which bears the intriguing title, ‘Chaos’, will juxtapose works by Baroque composers, including a passacaglia for solo violin by Biber, with works by contemporary Australian composers, including Nigel Butterley.

This entry was posted in Concert reviews and tagged Stan Kornel, Sydney Consort. Bookmark the permalink.