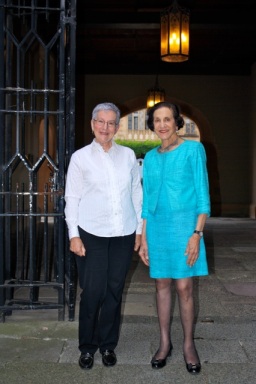 Catherine and the Choir’s Patron, HE Professor Marie Bashir

Catherine joined the choir in 2005, following two experiences in the George Faunce Allman Guest Choir, and she has sung with the Chamber Choir since 2007.

Her services to the choir include two years as President in 2007 and 2008, during which time she brought to the role of President an unusual level of energy and involvement. Her presidency was marked by exceptional skills and quiet diplomacy, which remain evident in all her dealings on behalf of the choir.

As President, Cath was responsible for a number of landmark decisions. To name only a few:

And as immediate Past President, she continued to provide wise counsel to her successor, particularly in connection with the choir’s legal status.

Also under Cath’s leadership, the choir was able to take steps to have Christopher Bowen’s musical and educational achievements recognised, with honours conferred both with the University and the community at large.

Last but not least, Cath has been the power behind initiating the presentation of the highly successful massed choir, ‘Sydney Sings Messiah’ concerts in the Sydney Town Hall. Starting in 2007, on top of other presidential initiatives, she managed the entire yearlong process for hundreds of guest singers, and all of the logistical arrangements for the concert.

Not content with the effort of organizing the first Sydney Sings Messiah in December 2007, she also carried the load with the subsequent editions of the concerts in November 2010 and, most recently, in November this year. This work has been done with painstaking attention to detail and has been important in advancing the Choir’s standing and profile in the Sydney choral and music scene.

In summary, Catherine Crittenden has given exemplary service as an office bearer and as a rank and file member of the choir. Her quiet, warm efficiency is a great asset to us all.

Editor’s note: Our Patron, Her Excellency Professor Marie Bashir AC CVO Governor of New South Wales, presented the Award to Catherine in the Great Hall during the final concert of 2012.