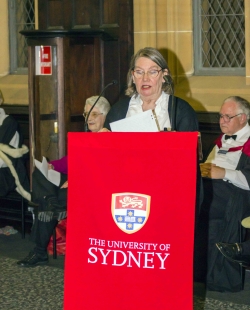 At the end of 1981, Jean Parry asked Judith Mee and me to come to the choir’s performance of “Messiah”.   I was quite impressed with what I heard, so I joined at the beginning of the next year – just in time for the 30th Anniversary celebrations.   The first big work we did was “Saul”, which was, I think, the only performance my Dad came to.   He commented that he hadn’t realised choirs could sing softly – he thought they only yelled!   “Alexander’s Feast” was the other larger work we did with Graham Abbott before he received his conducting scholarship and had eventually to leave us.   Jenny Turtle filled in at first, but she had other commitments so we invited various visiting conductors to take us.   We worked with the Conservatorium Church Music School, and so did things like the Haydn “Little Organ Mass” with Rudy Meyer from Winterthür, who was on exchange with David Rumsey.   The choir was quite small at that time so this and the Vivaldi “Gloria” that we did with Jürgen Jürgens of the Stuttgart Monteverdi Choir suited us better.   We also joined with the Con Choirs to do Haydn’s “Creation” with Richard Gill.

We did some choral services for the Garrison Church while we were there, the most memorable being one conducted by Simon (whose surname I have just forgotten).   He had his own orchestra with him and when the very elderly Rector said “Amen” at the end of the first prayer he stood up, the orchestra got ready – and the Rector started the next prayer – about four times!   My mother and Judy’s mother-in-law in the congregation could feel each other shaking with laughter and didn’t dare catch each other’s eyes.   The following year I had to take the choir for the service, so went to the Rector (a new one) and we carefully marked two prayer books.   But when I got there for the service, the Rector couldn’t find his copy, so I had to mark another for him on the spot!

The first time I had to conduct the choir was for Convocation, but no-one had told the organisers that Graham Abbott was not conducting, so I took the bow as Graham Abbott!

When David McBride was asked to conduct us, we were to do the Brahms “Requiem”.   The only problem was that David was overseas for about six weeks of the rehearsals, so I had the task of teaching the notes.   The choir has come on a long way since then — unlike now, notes were learned at rehearsals then — we even had extra rehearsals in my lounge room at home.   How we got through the work I’ll never know!

The following performance was Schubert’s “First Mass”.   I was allocated to sing in it provided I learned it while travelling overseas.   I remember my mother kicking me as I had my headphones on and the score in front of me, in a full compartment of the train from Salzburg to Vienna, as my learning was not absolutely silent.

As you can imagine, it was a great relief when we finally engaged Leonie Hempton as our permanent Music Director.   With Leonie in charge, the choir started growing again.   Leonie tried a few different things with the choir, such as setting us in the middle of the Great Hall with the audience right around us.   One very memorable performance was “Acis and Galatea” at the Garrison Church.   The soloists were all part of The Song Company – Keith Hempton was a founder member of that group – We wore semi costume, the ladies of the choir all dressed in coloured blouses.   It was while Leonie was with us that one of the “advantages” of the Garrison became apparent.   The Fire Station is around the corner in Kent Street, and every now and then we would hear their sirens.   On one occasion the wailing stopped and a couple of minutes later a head appeared at one of the windows high up in the wall behind us.   “Anyone here call the Fire Brigade?”   A totally bemused Leonie assured him all was OK – his head disappeared and the rehearsal continued.

When Keith and Leonie moved to Adelaide, Bill Kempster took up the position of Music Director.   At that time my mother was very ill and subsequently died so I dropped out for a couple of years.   After Bill we auditioned two conductors, and fortunately Christopher Bowen was chosen.   It has been a privilege to have been with the choir through this time, to see it develop and grow to the choir you see today, and to know that with Christopher out the front, we will continue to improve.

This entry was posted in Special Events and tagged Choir history, Clare Delgrano. Bookmark the permalink.